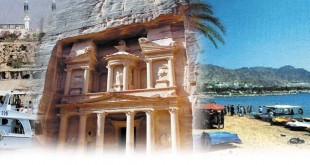 The giant red mountains and vast mausoleums of a departed race have nothing in common with modern civilization, and ask nothing of it except to be appreciated at their true value – as one of the greatest wonders ever wrought by Nature and Man.

Although much has been written about Petra, nothing really prepares you for this amazing place. It has to be seen to be believed.

Petra, the world wonder, is without a doubt Jordan’s most valuable treasure and greatest tourist attraction. It is a vast, unique city, carved into the sheer rock face by the Nabataeans, an industrious Arab people who settled here more than 2000 years ago, turning it into an important junction for the silk, spice and other trade routes that linked China, India and southern Arabia with Egypt, Syria, Greece and Rome.

Entrance to the city is through the Siq, a narrow gorge, over 1km in length, which is flanked on either side by soaring, 80m high cliffs. Just walking through the Siq is an experience in itself. The colours and formations of the rocks are dazzling. As you reach the end of the Siq you will catch your first glimpse of Al-Khazneh (Treasury).

This is an awe-inspiring experience. A massive façade, 30m wide and 43m high, carved out of the sheer, dusky pink rock-face and dwarfing everything around it. It was carved in the early 1st century as the tomb of an important Nabataean king and represents the engineering genius of these ancient people.

The Treasury is merely the first of the many wonders that make up Petra. You will need at least four or five days to really explore everything here. As you enter the Petra valley you will be overwhelmed by the natural beauty of this place and its outstanding architectural achievements. There are hundreds of elaborate rock-cut tombs with intricate carvings – unlike the houses, which were destroyed mostly by earthquakes, the tombs were carved to last throughout the afterlife and 500 have survived, empty but bewitching as you file past their dark openings. Here also is a massive Nabataean-built.

Roman-style theatre, which could seat 3,000 people. There are obelisks, temples, sacrificial altars and colonnaded streets, and high above, overlooking the valley, is the impressive Ad-Deir Monastery – a flight of 800 rock cut steps takes you there.

Within the site there are also two excellent museums; the Petra Archaeological Museum, and the Petra Nabataean Museum both of which represent finds from excavations in the Petra region and an insight into Petra’s colourful past.

A 13th century shrine, built by the Mameluk Sultan, Al Nasir Mohammad, to commemorate the death of Aaron, the brother of Moses, can be seen on top of Mount Aaron in the Sharah range.

Inside the site, several artisans from the town of Wadi Musa and a nearby Bedouin settlement have set up small stalls selling local handicrafts, such as pottery and Bedouin jewellery, and bottles of striated multi-coloured sands from the area.

It is not permitted for motorized vehicles to enter the site. But if you don’t want to walk, you can hire a horse or a horse-drawn carriage to take you through the one kilometre Siq. For the elderly and/or handicapped, the Visitors’ Centre, close to the entrance of the Siq, will issue a special permit (at an extra fee), for the carriage to go inside Petra to visit the main attractions. Once inside the site, you can hire a donkey, or for the more adventurous, a camel – both come with handlers and take designated routes throughout the site.

Petra was first established sometime around the 6th century BC, by the Nabataean Arabs, a nomadic tribe who settled in the area and laid the foundations of a commercial empire that extended into Syria.

Despite successive attempts by the Seleucid king Antigonus, the Roman emperor Pompey and Herod the Great to bring Petra under the control of their respective empires, Petra remained largely in Nabataean hands until around 100AD, when the Romans took over. It was still inhabited during the Byzantine period, when the former Roman Empire moved its focus east to Constantinople, but declined in importance thereafter.

The Crusaders constructed a fort there in the 12th century, but soon withdrew, leaving Petra to the local people until the early 19th century, when it was rediscovered by the Swiss explorer Johann Ludwig Burckhardt in 1812.