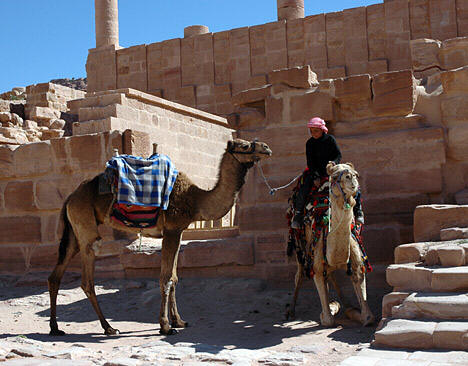 Jordan can be regarded for a typically Arab country for its people are very warm, friendly and hospitable. Jordanians are typically happy to forgive foreigners who break the rules of etiquette. However, visitors seen to be making an effort to observe local customs will undoubtedly win favour.

Joining local people for a cup of tea or coffee can be a wonderful way to learn more about local culture. If you are invited yet are unable to attend, then it is perfectly acceptable to decline. Place your right hand over your heart and politely make your excuses.

Many families, particularly in rural areas, are very traditional and, if you visit their house, you may well find it is divided between the men and women. Foreign women are often treated as “honorary” men.

Local women in Jordan enjoy considerable freedom when compared with many other countries in the region. Women are entitled to a full education, they can vote, they can drive cars, and they often play significant roles in business and politics. Arranged marriages and dowries are still common.

The word “Bedu” comes from the Arabic word “Badawi”, meaning “A dweller of the desert”. The Bedouin endure the desert and have learnt to survive its unforgiving climate. They treat it with due reverence, knowing that the wilderness has no respect for fools.

Today most of Jordan’s Bedouin reside in the vast wasteland that extends eastwards from the great Desert Highway.

The traditional Bedouin way of life has come about by adopting measures that ensure survival. There are a few societies whose existence is as harmonious as that of the Bedouin. They walk a tight line between life and death, balancing with tenacity and skill. They understand their flocks of goats and camels. Forging a synoptic relationship with them so that each depend on the other for survival. The herds rely on their masters for protection, the masters depend on their herds for milk, meat and skins. The constant wandering is no aimless venture; it is a carefully planned expedition for new pastures.

The clan is the centre of Bedouin Society. Each family has its own tent, a collection of which (known as Hayy) constitutes a gown of clan. A number of these clans make up a tribe (Qabilah). People living in the same clan are considered to be of the same blood. Leadership of the clan is the responsibility of the “Sheikh”, and elder to whom matters of strife or decision are brought for adjudication. In the Bedouin society, all men are seen equal, with elders commanding extra respect gained through experience.

The values of Bedouin society are vested in an ancient code of honor. This calls for total loyalty for the tribe, and to one’s position of work, in upholding the survival of the group. There is a sense of honor and pride in Bedoun hospitality.

A powerful symbol of the Bedouin people is the distinctive square head-cloth (Kaffiyeh), with its head-ropes (A’gal) to hold it in place. The wealthier Bedouin, would and still do wear A’gals woven with gold thread.

The costume of Jordanian woman has tended to be more elaborated than that of their counterparts possibly because women have traditionally attended to the embroidery and the making of clothes.

Costume has always been an important expression of identity in Jordan – a way of showing a sense of belonging to village, tribe of group. The costumes are a symbol of group identification and a strong reason for every village woman to keep a high standard of work and to stay true to her traditional patterns and designs.

Circasians are a non-Arab Islamic people, who originate from the Caucasusin Russia, fled during the 19th Century following persecution to live in other Islamic lands. Many Circasians now live in Jordan, their groups are spread through Amman, Jerash, Wadi-ElSeer, Sweileh, Zarqa, Azraq and other parts of the north. Circasians brought with them traditions from the Caucasus; weaving, basket making and carpentry.

Many of the older Circasians in Jordan worry about the preservation of traditional beliefs and customs that they brought from the Caucasus. Teaching through provervs and stories sought to give new generations a grounding in behavior.